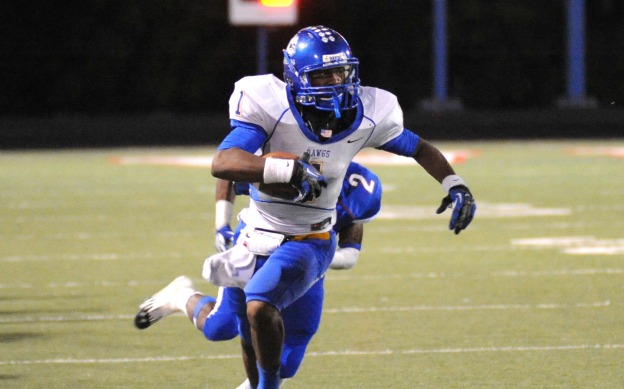 COPPERAS COVE – After a week-one heartbreaker, the Copperas Cove Bulldawgs put it together last Friday at Bulldawg North, also known as Waco ISD Stadium, with a 70-24 smothering of the Waco High Lions. Manny Harris was in a zone again, pushing his offense to tie a school record of 70 points in a game. Defensively, the Dawgs played well, too, with J.D. Post taking a Pick Six to the house.

“I’d say we were sporadic,” Copperas Cove head coach Jack Welch said about the game, “Some things we did very well, some things we did very poorly. Offensively, we moved the ball..started off real sluggish, but we got in the groove and once we did, things started to click for us. Defensively, we took a step from last week to this week, which is good. We made a lot of improvement..have a lot more to go. Our kicking game, overall, was very good, but the kickoff team was such a glaring atrocity..it puts a sour note to it, so we’ve got to get that corrected.”

“Overall, I’d say we took a step in the right direction, for the most part,” he added, “but the lone phase in the kicking game has got to get corrected right now.”

Offensive Dawg of the Week – Wide receiver Derrick Giles gets the nod..

“We thought he ran really good routes the other night and he did a good job of finding the hole,” offensive coordinator Tracy Welch said. “He did a fantastic job of going hard, playing hard. He was pretty much under the weather before the game and he fought through that.”

Defensive Dawg of the Week – Defensive back J.D. Post picks up that honor…

“He had two interceptions and returned one of them for a touchdown,” defensive coordinator Reb Brock said. “He played a pretty good game overall and made those two big plays that really helped us.”

If you haven’t heard, it’s Homecoming Week around CCHS and Copperas Cove (1-1) has another tough opponent coming in for this year’s Homecoming game and non-district finale. For the fourth-straight year, Los Tigres from Universidad Autonoma de Nuevo Leon are journeying up from Monterrey, Mexico. They’re one of, if not the best high school team playing the U.S. brand of football south of the border, having won the Mexican National Championship. Coach Welch says they will be tough…

“They’re typical of what we’ve seen the last few years,” said Welch. “They’ve got big linemen and some good skill people. The thing we’ve had with them the last three years that people don’t realize..right before our ball games, their two best ballplayers were lost (to injury) and they’ve always had a tremendous middle linebacker and again this year, they’ve got a guy that would be all-state in Texas. They’ve got some big offensive linemen and their skill people are playing well. Judging from their game with Shoemaker, I’d say they’ll be a tough opponent and we can’t overlook them.”

Kickoff is set for 7:30 p.m. Friday at Bulldawg Stadium with the game broadcast live on K1017 FM beginning at 7 p.m. with the Jack Welch Show. Tickets are available at the athletic annex and for more information, call Becky Jewell at 254-547-4111. Put on the Blue and Gold and be there to support the Dawgs!