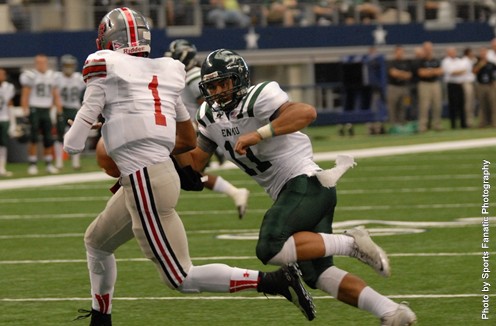 ARLINGTON, Texas – Eastern New Mexico utilized a solid ground game including three touchdowns by Andrew Lopez and forced five turnovers to top Sul Ross State 55-24 in the Lone Star Football Festival Friday at AT&T Stadium.
After a scoreless first quarter, SRSU opened up the scoring with a pair of touchdowns.  The Lobos Keyon Lee broke a 75-yard run and Cordrick Mobley caught a five-yard pass less than three minutes into the second quarter.
From that point on it was all Greyhounds.  Jordan Wells started the string of four straight touchdowns with a 64-yard scamper.  Andrew Lopez gave ENMU a 13-12 lead with a two-yard run, and then extended the margin with two more scores.
The Greyhounds outscored SRSU 35-12 in the second half including a defensive score when Benjamin Langford picked up a Lobo fumble and returned it 39 yards.
It was the second straight game versus a Lone Star Conference team for SRSU, who opened the season with a loss at A&M-Commerce last week.
ENMU (1-1) faces the United States Air Force Academy junior varsity team in an exhibition contest next week, while SRSU (0-2) plays at Trinity.
The three-day, 14-team LSC Football Festival continues Friday with two games: Delta State vs. Texas A&M-Commerce at 5 p.m.; and Monterrey Tech Puebla vs. Monterrey Tech Mexico City at 9 p.m. The event concludes Saturday with another tripleheader: Monterrey Tech vs. Texas A&M-Kingsville at noon; Tarleton State vs. Midwestern State at 4 p.m.; and Colorado State-Pueblo vs. Angelo State at 8 p.m.