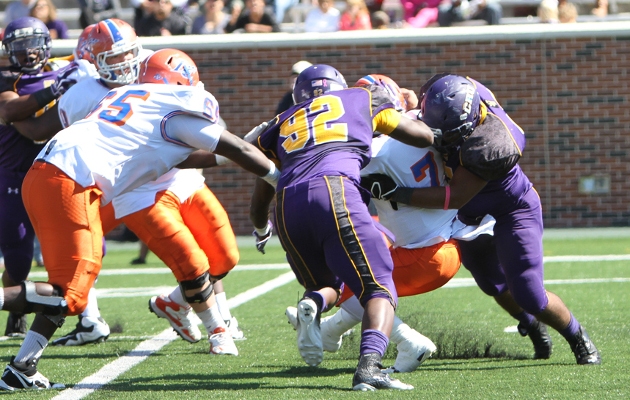 BELTON – After more than a month of home games, the University of Mary Hardin-Baylor football team heads back out on the road this weekend for a key American Southwest Conference showdown this Saturday in Abilene. The Cru and Cowboys will face off in a 1:00 PM kickoff at Shelton Stadium on the Hardin-Simmons campus. The winner of the UMHB-HSU game has won at least a share of every ASC Championships since the two teams first met in 1998.

UMHB will enter Saturday’s game with a 6-0 overall record and a 2-0 mark in ASC play on the year. The Cru is ranked #2 in the country by the American Football Coaches Association and is #3 in the nation in the D3football.com Top 25 Poll. Hardin-Simmons has a 3-3 overall record and a 2-1 mark in ASC play and the Cowboys are coming off their most complete performance of the season in a 55-17 victory over East Texas Baptist last Saturday. UMHB leads the all-time series between the two teams 13-5 and the Cru has won the last 11 meetings between the two teams. UMHB has won 12 of the last 13 games against HSU after dropping the first four meetings between the two teams. The Cru enters Saturday’s game coming off a 45-34 home victory over Louisiana College in a game that saw UMHB turn the ball over four times and give up 476 yards of total offense to the Wildcats.

“I think our guys were a little disappointed in how they played last Saturday and you could sense it when they came in on Sunday,” Cru Head Coach Pete Fredenburg said. “That came from the players, not from the coaches. And they really resolved to get better this week. And we need to, because its Hardin-Simmons week. I don’t care what the records are, this is always a big game and I think that reverberates through both programs.”

UMHB will be playing a road game for the first time since a September 14th game at Kean University in Union, New Jersey. After opening the season with two road games, the Cru played its next four games at Crusader Stadium and also had an open week during that stretch. UMHB has an all-time road record of 70-22.

Saturday’s game will be broadcast live on K101.7 FM and through the station’s web site with the pre-game show starting at 12:30 PM. UMHB will also provide free live video streaming of the game. You can access the UMHB video stream by clicking here: http://client.stretchinternet.com/client/umhb.portal. Hardin-Simmons will provide live statistics through the following link: http://livestats.prestosports.com/hardinsimmons/.