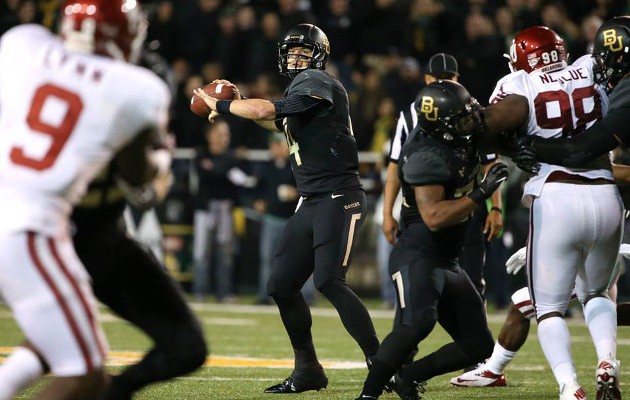 WACO – Bryce Petty threw for three touchdowns and ran for two more, Shock Linwood ran for 182 yards and fifth-ranked Baylor remained unbeaten by passing its first big test with a 41-12 rout over No. 12 Oklahoma on Thursday night.

But the story of the night was the Bears defense shutting down the Sooners offense before a raucous ‘#Blackout’ crowd of 50,537, the fourth-largest ever at Floyd Casey Stadium.  The fans dressed in black for the game may have helped the Bears turn the lights out for Oklahoma.

“I hope this changes the outlook on our defense and the whole team,” Baylor safety Ahmad Dixon said. “We played lights out football. We were ready to get after those guys. Our defense stepped up big but this was a team win. The sky’s the limit.”

Even though the Bears came in leading the nation in scoring (64 points per game) and total offense (718 yards per game) – and was outscoring opponents by an average margin of 48 points – many questioned how good the Bears were after getting into November without playing a ranked team. They have now, the Bears limited the Sooners to just 237 total yards.

Oklahoma (7-2, 4-2) has a 21-2 lead in the series, but both losses have come in its last two trips to Floyd Casey Stadium for prime-time games.

With running backs Lache Seastrunk and Glasco Martin getting banged up in the game, Linwood ran 23 times. The Bears also were missing top receiver Tevin Reese, who was without a catch before injuring his wrist and spending the second half on the sideline with his arm in a sling.