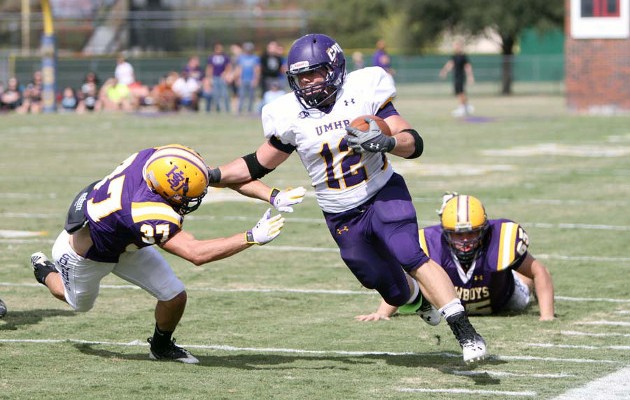 Hudson, a senior running back from Albany High School, carries a 3.88 GPA as a pre-physical therapy major. Hudson leads the Cru with 995 rushing yards and has ten touchdowns on a team-high 185 carries despite missing three full games. He also has 13 receptions for 210 yards and two more touchdowns. Hudson was a First Team American Southwest All-Conference selection this season.

Holt, a senior offensive guard from Lorena High School, maintains a 4.00 GPA as a dual major in exercise and sport science and history. He has started 11 games for an offense that is averaging 287.8 rushing yards and 486.4 yards of total offense on the season. Holt also earned First Team All-Conference honors this season.

The Cru football team is 12-0 this season and will host St. John Fisher College in the Quarterfinals of the NCAA Division III National Championships this Saturday at Crusader Stadium. UMHB is in the National Quarterfinals for the fourth straight season and the seventh time in the last eight years.

To be eligible for Academic All-America® consideration, a student-athlete must be a varsity starter or key reserve, maintain a cumulative G.P.A. of 3.30 on a scale of 4.00, have reached sophomore athletic and academic standings at his/her current institution and be nominated by his/her sports information director.
Since the program’s inception in 1952, CoSIDA has bestowed Academic All-America honors on more than 16,000 student-athletes in Divisions I, II, III and NAIA, covering all NCAA championship sports.
For more information about the Academic All-America® Teams program, please visit www.cosida.com.