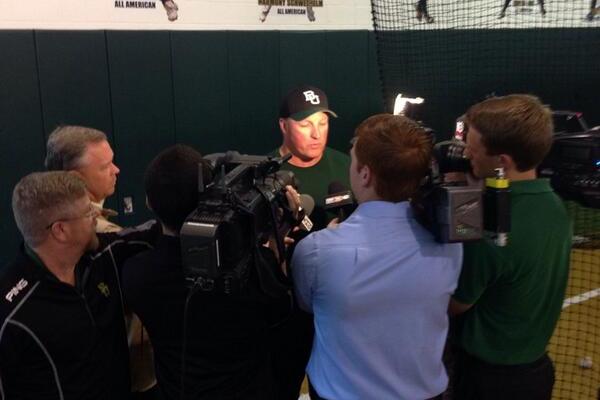 WACO, Tx – The No. 13 seed Baylor Lady Bears will face the No. 5 seeded Florida Gators in Oklahoma City at the ASA Hall of Fame Stadium for the opening game of the 2014 NCAA Women’s College World Series.

The game will play witness to the top two active wins leaders going head to head in the circle. Baylor senior Whitney Canion (1.40 ERA) has consistently terrorized the Big 12 conference with an array of pitches.

“Pitching is the name of this game, if you don’t have a good one you’re not going very far no matter what the rest of the team looks like and we’ve got a good one,” Baylor head coach Glenn Moore said about Canion. “As a matter of fact, I think she’s the best in the country and she’s put this team on her back.”

Still going after arm and knee injuries cost her two seasons, Canion isn’t going to leave the circle willingly in her final run. A week ago, she was a tough-luck loser in an 11-inning game against Tulsa, then turned around and won an elimination game against the same team later the same afternoon. In all, she threw more than 300 pitches that day.

“She has been determined to get back to the World Series since she’s hurt herself,” Moore added.

Trying to match her pitch for pitch will be Florida’s Hannah Rogers (1.68 ERA) and Moore believes in the Lady Bears’ offense that hit a school record 70 home runs this season, breaking the previous record of 68 in 2006.

“We’ve got a good offense, we’ve set a record in home runs,” he said. “That’s phenomenal to hit that many home runs and play in Getterman Stadium, which most people know is one of the toughest parks in the country to hit home runs out of.”

The Lady Bears return to WCWS for first time since 2011.

“The difference this year as opposed to 2011 is that we have a much better offense,” Moore said. “I think that’s motivating us a little a bit to think we have a shot at winning this thing.”

The Lady Bears take on Florida on TV at ESPN and on radio at ESPN Central Texas Thursday at 11 am.