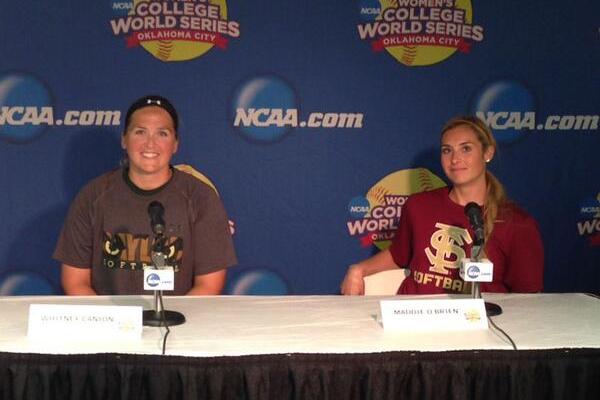 OKLAHOMA CITY, Oklahoma – Whitney Canion became Baylor softball’s first, First-Team All-American Wednesday when she was awarded with the honor at the NFCA press conference in advance of the Women’s College World Series.

Canion, a senior left-handed pitcher from Aledo, Texas, has a 31-10 record and a 1.40 ERA headed into Thursday’s WCWS. Canion earned the second all-America honor of her career after earning second-team honors as a redshirt sophomore in 2011.

Two medical redshirts have extended Canion’s career to six years as she missed the majority of the 2010 and 2012 seasons with injury.

“I couldn’t have done it without my teammates this year, it wouldn’t be possible without them,” Canion said. “I’d also like to single out Clare Hosack for catching me every game. I’m honored to accept the award, but this is a Baylor award.”

So far in 2014, in addition to leading the program to its third WCWS appearance in history, she’s tied a school record with 31 victories. Canion has held hitters to a .173 batting average and tied a career-high with 10 shutouts.

Canion appeared in 26 games this season against the field of 63 other teams that advanced to the NCAA Tournament. In those games, she posted a 16-8 record with a 1.60 ERA and held opponents to just a .190 batting average.

Canion’s signature wins this season were many. She pitched a two-hit shutout against No. 14 South Alabama, March 1 with 12 strikeouts to pick up her 100th career victory. Then, April 30 she threw the fifth no-hitter of her career against McNeese State, striking out 14 in a seven-inning effort.

She became the Big 12’s third all-time leader in wins May 2 at Iowa State striking out eight Cyclones for her 116th career victory.

However, it would be hard to top any of Canion’s 2014 postseason appearances. After wins over Norhwestern State and Tulsa to open the Waco Regional May 16-17, she threw 305 pitches over 17.1 innings in a 5.5-hour period May 18 in back-to-back games vs. Tulsa to ensure Baylor’s advancement to the NCAA Super Regional round. The Lady Bears lost 1-0 in the first game in the bottom of the 11th inning before Canion rebounded with a complete game in the round-clinching 3-1 win.

In Athens, Georgia, she closed the door on the Bulldogs on their home field with a two-hitter in game one May 23, and she grinded through 169 pitches in game two to help Baylor beat Georgia 6-3 to punch the team’s ticket to the WCWS.

“I don’t know of another pitcher who has done more for our program than Whitney Canion,” said Baylor head coach Glenn Moore. “She is a true all-American on and off the field.”

In addition to her NFCA all-America nod, Canion was a 2014 NFCA Central Regional First-Team selection, a COSIDA/Capital One Second-Team Academic All-American and the Big 12 Pitcher of the Year

Baylor takes on Florida in the first game of the WCWS Thursday at 11 a.m. on ESPN.