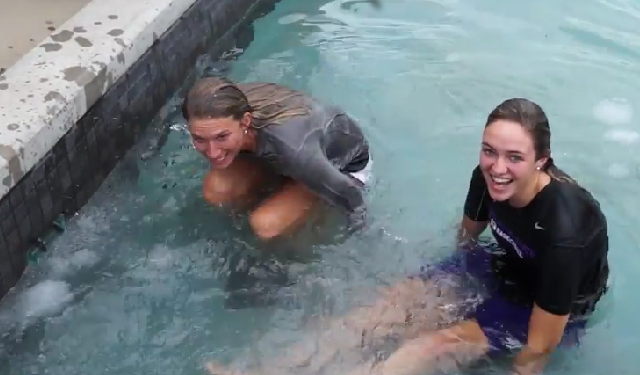 STEPHENVILLE – A nationwide challenge has reached Tarleton State head coach Misty Wilson and the rookie head coach, along with senior post Karli Moore, has accepted it.

The Cold-Water Challenge has been making its way across the country, primarily among women’s basketball coaches. The challenge raises money for the Kay Yow Foundation through coaches donations and encourages community service. Wilson was called out by, former TexAnn basketball standout and current Cal Poly Pomona head coach, Danelle Bishop.

Wilson had 48 hours to complete the challenge and, in turn, challenge three of her fellow coaches to the same challenge to be completed in the next two days. She challenged Midwestern State head coach, Noel Johnson; Eastern New Mexico head coach, Joshua Prock; and Texas Woman’s head coach, Beth Jillson.

The Kay Yow Cancer Fund was founded in 2007 from the vision of the organization’s namesake Kay Yow, former NC State head coach.

Kay Yow was first diagnosed with breast cancer in 1987, and passed away on January 24, 2009, after facing her third bout with the disease. Before her death, she joined forces with the Women’s Basketball Coaches Association (WBCA) and The V Foundation for Cancer Research to form the Kay Yow Cancer Fund, a charitable organization committed to being a part of finding an answer in the fight against women’s cancers through raising money for scientific research, assisting the underserved and unifying people for a common cause.

Additionally, Kay felt as if coaches not only shared a profession but a community. It is with this communal mentality that Kay, despite her humility, served as the platform to rally a nation of coaches to be a part of one team against one opponent – cancer.

Her battle against breast cancer was fought in the public arena with the hope of inspiring others to make a difference. Kay’s vision for the Fund encompassed, not only her wish to fund cancer research, but also her desire for coaches to enrich their lives by serving others. Even in her death, Kay was helping others through the creation of the Kay Yow Cancer Fund whose mission is to extend and improve the lives of all those battling cancer.