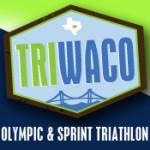 The sixth annual TriWaco is an Olympic and sprint distance event in the Heart of Texas sanctioned by USA Triathlon. The event begins with a 1500-meter open water swim in the Brazos River followed by a mostly flat and fast 25-mile bike ride on country roads north and west of Waco. The race finishes out with a hilly 10-kilometer run along the Brazos River that leads to the oldest suspension bridge in the United States.

The Sprint distance event includes a 400-meter swim in the Brazos River, a 12-mile bike ride along the same country roads and a 5-kilometer run finishing on the suspension bridge.