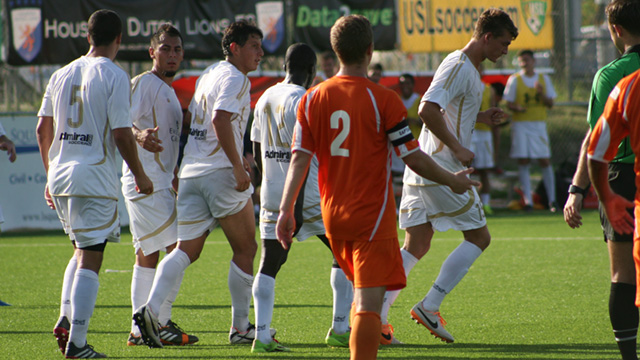 HOUSTON – The Austin Aztex took care of business and defeated the Houston Dutch Lions by a score of 4-1 on the road to take home their franchise record-setting sixth road win of the season on Tuesday evening.

With the win, the Aztex (10-1-1) continue to hold serve in the hunt for the top seed in USL PDL’s Southern Conference. The Aztex currently hold a five point lead over the Ocala Stampede, who have a 8-1-2 record with 26 points in the conference’s Southeast Division.

The Aztex quickly established control of the game in the opening 15 minutes and forced some early changes on their opponent’s goal, but were unable to break through. The Lions (1-7-3) would then seize control of the match for the next ten minutes, coming up with a series of shots and corner kicks. This buildup in pressure culminated in a shot on the Aztex goal in the 20th minute which caromed off of the crossbar.

The Aztex would take control of the match in the 26th minute when Buba Jobe chased down a ball on the right side of the field and hit in a cross that found Aztex midfielder Hector Gomez. Gomez took a sweeping shot from the top of the penalty area which raced past Dutch Lions goalkeeper Emmanuel Frias.

The Aztex would add an insurance goal in the 37th minute when Aztex goalkeeper Devin Perales hit a long diagonal ball to left back Kalen Ryden. Ryden chased down the ball in stride for a one-on-one with Frias. Ryden got past Frias with a quick move to the left and calmly hit the ball by the near post before the trailing defense could catch up to the play. With the goal, Perales was credited with his third assist in the previous five games.

Perales would go on to deny Houston from climbing back into the game with a pair of saves in the 40th and 56th minute.

Halftime substitution Sito Seoane helped put the game away in the 70th minute when he worked with Justin Franz to break down the opposing defense. With a deft through ball, Franz led Seoane past the Dutch Lions backline, where Seoane collected the ball and fired a left-footed shot low and to the right past Frias.

Seoane nearly collected his second goal of the game when the Aztex were awarded a penalty kick after a Dutch Lions player handled the ball inside the penalty area in the 86th minute. Seoane lined up for the shot but his attempt was off target. Houston quickly seized the letdown on the missed attempt and quickly worked their way up to the Aztex goal, where a defensive miscue allowed Wessel Verhaar to get the ball in front of the Aztex goal. Verhaar fired a shot past Perales to end the Aztex shutout bid.

Aztex midfielder Adam Black sealed the victory for the Aztex in stoppage time when he buried a left-footed free kick to the bottom right corner of the goal.