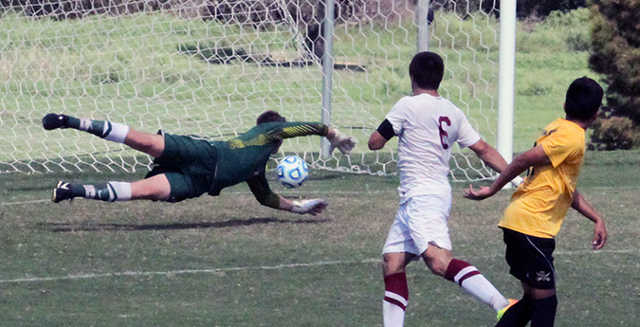 GEORGETOWN – For the second time this season, sophomore Andres Carreño-Mendez scored the game winning goal in overtime, this time over Centenary College to give the Pirates a 1-0 victory.

It took just a moment for the Pirates to make their presence known as Christian Lopez played a ball across the face of goal to an open Zack Faulkner. Faulkner was muscled off the ball and wasn’t able to make contact on his one touch shot and the opportunity passed.

Andres Carreño-Mendez nearly put the Pirates up with a header off a goal kick that was saved by the Gents’ defensive line.

The first half completed without either team putting the ball in the back of the net.

Following the break, Southwestern came out on fire and drilled shots at the Centenary goal, but they were just off the mark or saved by CC’s keeper to keep the game deadlocked at zero.

Regulation came to a close scoreless so the game rolled into overtime. The Pirates started strong in overtime and just past the halfway point of the frame, Andres Carreño-Mendez  put home the game winner. Carreño-Mendez confidently brought the ball down the field on a counter-attack and cut back to the middle and played the ball low and just inside the right post and into the back of the net to had SU the golden goal win.

The Pirates improve to 5-6 on the year and 5-2 in the SCAC while Centenary falls to 4-4-2 and 1-4-2 in conference action. Southwestern returns to the road to open the second half of conference play as they face Colorado College in Colorado Springs at 4 pm CST on Friday.