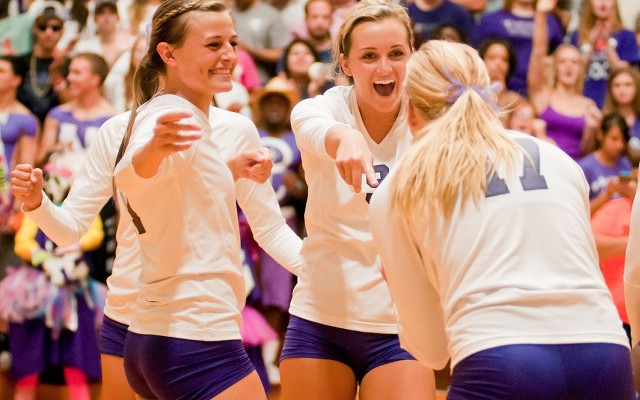 STEPHENVILLE – Tarleton State needed just over an hour to earn win No. 16 of the season Friday night with a clean sweep of conference rival, Midwestern State.

For the TexAnns, this win marks the sixth time Tarleton has reached the 16-win plateau in the 10-year career of head coach Mary Schindler. It is also win No. 172 for Schindler in her career, which is 118 more than the second-most wins for a Tarleton head coach (54).

After Midwestern State scored the first point of the set, an error turned the serve over to Tarleton and the TexAnns never looked back.

Tarleton built a 9-5 lead in the opening set and, after the teams stayed even through 14-10, a kill from Hailey Roberts was the first point of an 11-8 TexAnn push down the stretch – which ended on a game-winning kill shot from Kenya Alexander for the 25-18 win.

The Mustangs opened up the second set with a quick 3-0 run, but Kaitlyn Whiteput a stop to the opening push with a kill and then served up a service ace to get the TexAnns rolling. Her kill started a 13-6 Tarleton run to give the TexAnns a 13-9 lead after the first 22 points.

Tarleton pulled away with back-to-back blocks from Kelsey Raglin and Jasmyne Brown and Brown and Roberts for a 17-11. The teams split the final 16 points, which was enough for Tarleton to take the second set 25-19, ending it on a Raglin kill.

In the third set, the TexAnns were dominant from the get-go as a solo block from White got Tarleton on the board and started a 13-3 run by the TexAnns to open the game. Tarleton then built the lead to 18-5 before Midwestern ever scored consecutive points.

The Mustangs got to within 19-10 but a kill from Ashley Rine turned the serve over to Emily Medlin, who served up three straight points to pull the TexAnns even farther away at 22-10. A kill from Raglin and back-to-back kills from Roberts ended the game 25-12 and the match 3-0.

As a team, the TexAnns boasted a .360 hitting percentage – compared to just .106 for Midwestern – and hit .571 in the third set alone. Roberts was the only TexAnns in double figures with 12 kills while Alexander and White each had nine.

Brown led the team with seven blocks while Katie Covell recorded a team-high 11 digs. The setting tandem of Medlin (20) and Chandler Gow (16) combined for 36 of the team’s 38 total assists. As a team, Tarleton won the blocking battle 11-4.

The TexAnns will return to action Saturday afternoon with a 2 p.m. game against Cameron in Wisdom Gym