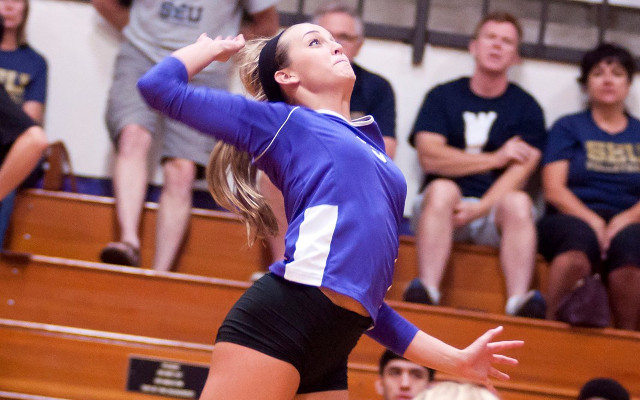 Tarleton fell behind slightly in the opening set, trailing 12-10 after the first 22 points, before a Jasmyne Brown kill shot started a 5-0 TexAnn run to put Tarleton on top 15-12 and scored a Javelina timeout. Out of the break, Tarleton extended the lead to 19-14 with a quick 4-2 push.

After Tarleton pushed the lead to 24-17 and Kingsville pushed back with two unanswered points, Hailey Robertsended the first set with a kill off a pass from Emily Medlin for the 25-19 win.

In the second set, Kingsville only managed to score back-to-back points once during the first 23 points as Tarleton carried the momentum to the tune of a 14-9 lead. From that point on, the teams stayed tight with Kingsville holding a slim 11-10 advantage over the next 21 points to the 24-20 mark.

It was Roberts again, however, that put the game away with a kill shot for a 25-20 win and a 2-0 advantage in the match.

Kingsville opened the third set with a 2-1 advantage before a Roberts kill turned the tide and led to TexAnn domination of the rest of the set. Tarleton scored seven straight on three Roberts kills, twoKelsey Raglin kills, a Kingsville error and a block from Roberts and Jasmyne Brown to lead 8-2.

After Tarleton built the lead to 12-4, Kingsville pushed back to cut the TexAnn lead back to five at 15-10 but a Kaitlyn White kill started a 9-3 Tarleton run to push the game to the brink at 24-13. Kingsville scored two more points before White ended the game with a kill at 25-15.

Roberts led the team with 20 kills, her second-straight 20-kill effort, on 37 attacks and just four errors for a .432 hitting percentage. As a team, the TexAnns hit .316 and committed just 13 attack errors combined in three sets.

White added seven kills while Kenya Alexander and Ashley Rine were close behind with six. Emily Medlin (22) and Chandler Gow (17) combined for 39 assists in the TexAnns’ offensive onslaught whileKatie Covell led the team with 22 digs.

Tarleton will return to action a week from today in the final home stand of the season, beginning Oct. 31 against Eastern New Mexico at 6 p.m. in Wisdom Gym.