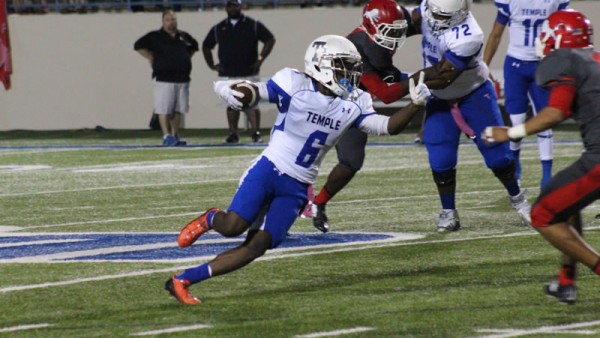 WACO – With the regular season coming to a close, the Temple Wildcats achieved one of their season goals on Friday night, securing a state playoff berth. Temple, with outstanding performances from Jeff Carr and Clint Cole were able to defeat long time rival Waco 49-40 at Waco ISD Stadium and improve to 5-0 in District 17-5A.

Temple, ranked No.2 in the state have been playing with a bulls eye on their back with the ranking having to fight off a spirited Waco Lion team that had come off a bye week and extra time to prepare however with Carr and Cole making their presence known in multiple phases of the game would have nothing to do with a Lion upset on this night.

Carr rushed 10 times for 157 yards and two touchdowns on the ground while adding a kickoff returned for a touchdown and Cole picked up 2 interceptions, including one for pick 6 leading the charge for the Wildcats.

Coming into the game, Waco had defeated the Wildcats in their last six appearances, the last one dating back to 2005. However, Carr made an early statement that the streak would end tonight as he took the opening kickoff at the goaline and following Cole’s initial blocked dodged Waco defenders for a spectacular 100 yard kickoff return for a touchdown putting Temple up 7-0 only 18 seconds into the game.

Following a Louis Davis 34 yard touchdown run for the Lions, Carr sprinted up the middle 78 yards untouched on the Wildcats first play from scrimmage giving the Wildcats the lead back at 14-7.

On Waco’s next possession, Ty McCorkle forced Waco quarterback Derrick Scott to hurry his throw and Cole jumped in front of the intended receiver and sprinted 40 yards untouched to the endzone putting Temple up 21-7 with 8:19 left in the first quarter.

Temple’s defense forced the Lions into a 3 and out to start the third and Temple quarterback Chad President hit the speedy Davion Curtis in stride on a 47 yard touchdown strike putting the cats up 35-14 with 10:18 remaining in the third quarter. President would finish 5 of 10 for 108 yard passing and 85 yards on the ground.

Waco then got a pair of touchdowns from Will Richards sandwiched around a successful onside kickoff recovered by the Lions to pull within 35-27 with 5:37 left in the third.

Temple marched back down the field fighting off multiple flags along the way including a 32-yard touchdown pass from President to Carr on 3rd and 15 called back due to a penalty. President then shook off the 3rd and 20 again by finding Zack Rumfield for 24 yards and a Wildcat first down inside the Lion 10 yard line. Two plays later, President found Chris Minter from 3-yards out to put Temple back up 42-27 with 2:49 left in the third.

Waco scored quickly off another 19 run from Davis with 1 second remaining in the third. But on the ensuing kickoff, Cole returned the kick 96 yards for an apparent Wildcat touchdown which was once again called back due to blocking penalty.

Temple responded backed up against their goaline to start the fourth quarter with President finding Minter and giving the Temple offense breathing room outside their 25 yard line. Minter picked up 3 receptions for 47 yards. The drive would culminate on a 3 yard Marques Hatcher run giving Temple a 49-34 lead with 9:19 left in the fourth.

Following a Scott 1 yard run bringing the Lions back to within 49-40 with 6:40 remaining, Waco successfully executed another onside kick forcing the Temple defense back on the field. Temple responded by getting the Lions to turn the ball back over on downs.

Temple’s offense failed to pick up a first down on their next possession giving the Lions one more chance. However, with 1:06 remaining, Cole got his second interception of the night leaving it up to President to take three kneel down to close out the 49-40 victory.

Temple (7-1) will now get some time off for the first time since reporting in August with a bye next week. The Wildcats already in the playoffs will host Elgin (4-0) at Wildcat Stadium on November 7th. This battle may look to be a battle of unbeatens as Temple will attempt to collect its next goal, a District 17-5A championship.