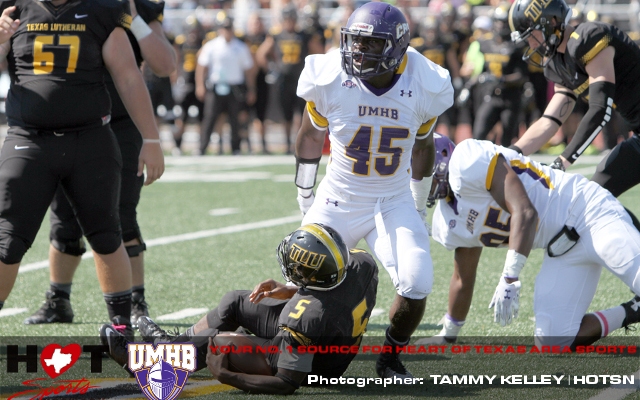 SEGUIN – The University of Mary Hardin-Baylor football team exploded in the second quarter to break open a close game as the 2nd-ranked Cru raced past 17th-ranked Texas Lutheran University 72-16 Saturday afternoon in Seguin. UMHB improves to 7-0 on the season with the victory and wins its 14th straight over the Bulldogs. Texas Lutheran falls to 6-1 on the year with the loss.

The two teams traded field goals on their opening possessions with Tyler Brandenburg hitting from 40 yards out for TLU and Jacob O’Neill connecting on a 50-yarder for the Cru. Brandenburg added a 23-yarder on the next Bulldog drive to give TLU a 6-3 edge. That would be the final lead of the game for Texas Lutheran. Duane Thompson scored on a six-yard run with 4:24 left in the first half to put UMHB up 10-6. A bad snap cost UMHB a shot at another field goal on the Cru’s next possession. But after the UMHB defense held, Eric Nelson reeled in a 72-yard touchdown pass on a ball that was tipped by players from both teams. Thompson followed with touchdowns runs of one, 26 and six yards and Zach Anderson hit Marcus Wimby with a 38-yard touchdown pass to close out a 35-point second quarter and give the Cru a 45-6 halftime lead. Kamray Runnels returned a punt 86 yards for a score and Blake Jackson hit Nelson with a one-yard scoring strike to stretch the lead to 59-6 before Trenton White broke the TLU drought with a 15-yard TD strike to Caleb Oliver. Damon Thomas scored on a one-yard run and Ryan Allenreturned an interception 40 yards for another score to push the lead to 72-13. Kike Valladares closed out the scoring with a 39-yard field goal for TLU with 59 seconds left to play.

UMHB rolled up 553 yards of total offense with 372 of those coming through the air. Texas Lutheran totaled 412 yards but more than half of those came in the second half after the outcome had been decided. The Cru defense forced five turnovers and scored 27 points off those turnovers.

Anderson threw for 324 yards and two touchdowns on a 16-22 day. Jackson was 6-7 through the air for 48 yards and a score. Thompson tied a school single-game record with four rushing touchdowns. Nelson and Wimby both went over 100 yards receiving for the Cru. Deshon Kinsey andKris Brown both had seven tackles and two tackles for loss and Brown added an interception for UMHB.

Marquis Barrolle was held to 91 rushing yards on 24 carries, nearly 100 yards below his per-game average entering the contest. White was 12-24 for 164 yards and a touchdown and Jonathan Olonade topped the Bulldogs with eight tackles.

The Cru will now return home and return to American Southwest Conference play with a showdown against Hardin-Simmons University next Saturday. That game kicks off at 1:00 PM at Crusader Stadium. The UMHB-HSU winner has gone on to win at least a share of every ASC championship since 1998. UMHB also stretched its regular season winning streak to 51 straight games with Saturday’s victory.