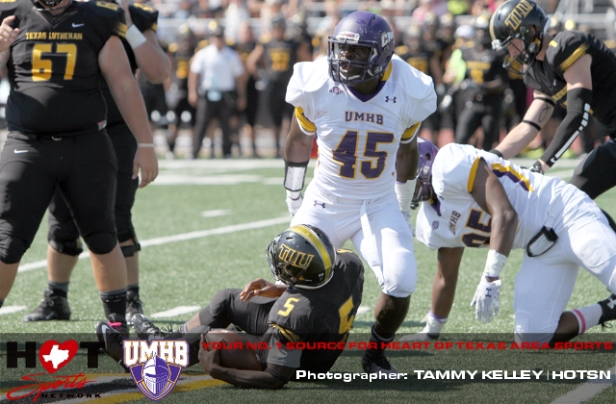 BELTON – The University of Mary Hardin-Baylor football team has always had a rivalry with Hardin-Simmons University, dating back to the program’s inception in 1998. In fact, the winner of the UMHB-HSU game has gone on to win at least a share of the American Southwest Conference Championship every year. When the two teams square off for the 20th time this Saturday, the stakes will once again be high, with sole possession of first place in the ASC on the line. The last two programs still unbeaten in ASC play will kick off at 1:00 PM at Crusader Stadium.

The Cru comes into Saturday’s game with a 7-0 overall record and a 2-0 mark in ASC play. UMHB is ranked second in the country by both the American Football Coaches Association and D3football.com. UMHB is coming off a 72-16 victory over a then unbeaten and nationally-ranked Texas Lutheran program last Saturday in Seguin. Hardin-Simmons is 5-1 overall and also has a 2-0 mark in the ASC on the year. The Cowboys are coming off a 51-20 victory over Howard Payne last Saturday and have not lost since falling to Texas Lutheran at home earlier this season. This rivalry has been a little more one-sided over the past few years, but the UMHB coaches don’t have to remind the players what this game still means to the Cru.

“We aren’t concerned about HSU having our player’s attention at all,” Cru Head Coach Pete Fredenburg said. “They know the history of this series and what these games mean. There is just a different feeling around here when it is Hardin-Simmons week. It is just in our DNA or something and I know our players and younger coaches feel that way, too.”

The Cru leads the all-time series between the two teams 14-5 and UMHB has won the last 12 meetings between the two teams. This will be the first time the two teams have met in a varsity contest at Crusader Stadium. The Cru has hosted the Cowboys for junior varsity games in the stadium in both 2013 and 2014. The two teams enter Saturday’s contest with the longest active regular season winning streaks among ASC teams. UMHB has won 51 consecutive regular season games. Hardin-Simmons has won five in a row since falling at Texas Lutheran in week #2 of the season.

For more information on parking, traffic flow and game day events, please visit the following link: http://www.umhb.edu/stadium/game-day-information/#directions-parking. There will be parking reserved for Hardin-Simmons fans in the parking lot at the corner of Martin Luther King, Jr. Street and College Drive. Cowboy fans are encouraged to enter the stadium through ticket window #3 at the southeast corner of Crusader Stadium.

Saturday’s game will also be broadcast live on K101.7 FM and through the station’s web site with the pre-game show starting at 12:30 PM. UMHB will provide live video streaming and live statistics for the game with links to both available by clicking here: http://portal.stretchinternet.com/umhb/. Tickets are still available and the ticket windows are scheduled to open at 11:00 AM on Saturday. Reserved tickets are $10. General admission tickets are $8 for adults and $4 for students. The stadium gates will open at 11:30 AM on Saturday.