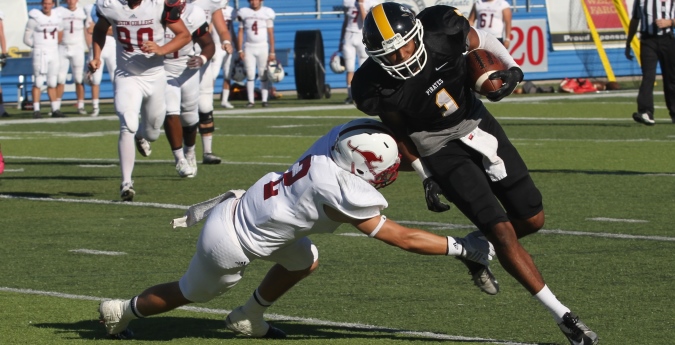 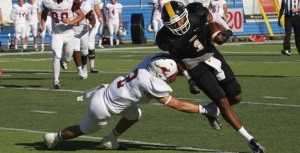 Austin College opened with a 12 play, 45 yard drive, but the Pirate defense locked down the ‘Roos in the red zone to force a field goal. AC’s Reynoso sent it through the uprights to put Austin College on top 3-0.

Laith Tucker had the equalizer with a 28-yard field goal for the Pirates, but Austin College cushioned their lead with a 20-yard touchdown reception to Woodyard with 7:21 remaining in the half, putting the Pirates down 10-3.

The Pirates got to work, however, and constructed a nine play, 99-yard drive that was capped with a 10 yard completion from Bryan Hicks to Taylor Stephens. After a blocked extra point attempt, Southwestern was within one, 10-9, with less than four minutes to play in the first half.

A pair of rushing touchdowns by AC’s Ross to close the first half sent the Pirates into the locker room trailing 24-9.

Following the break, Austin College struck fast, scoring on just their second play from scrimmage with a 44-yard completion to Crawford.

Dylan Wilburn rumbled through the AC defense from one yard out, capping off a 6-play, 72-yard drive and cut the lead to 31-16.

Austin College closed the third with a 25-yard touchdown run from Murphy and a 22-yard Reynoso field goal to put SU down 40-16.

Hicks found Micah Sherman open in the end zone on the opening drive of the fourth, but the two-point conversion was unsuccessful as Southwestern trailed 40-22.

AC and SU each added a rushing touchdown in the final three and half minutes to arrive at the 47-29 final.

Wilburn led the ground attack with 77 yards on 13 carries and two touchdowns.

Southwestern falls to 1-6 on the year and 0-1 in the SCAC while Austin College improves to 5-3 overall and begins 1-0 in SCAC action.

The Pirates host their final home game next Saturday as they seek revenge against Trinity for Homecoming. Game time is set for 6 pm.