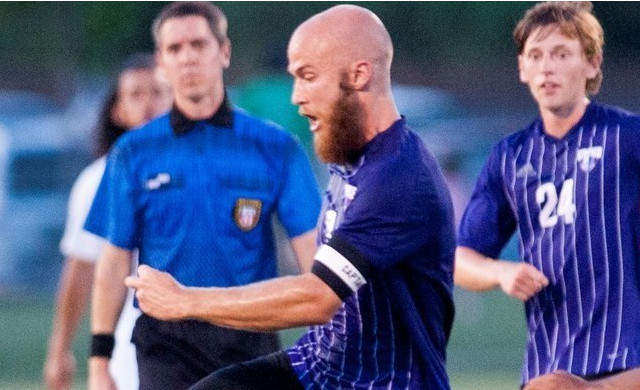 RICHARDSON – The University of Mary Hardin-Baylor men’s soccer team fell to No. 24 U.T.-Dallas 1-0 Saturday afternoon in Richardson. The loss eliminates the Cru from the 2014 American Southwest Conference Men’s Soccer Championship Tournament while No. 1 seed U.T.-Dallas advances to the championship match.

Connor Crabtree gave U.T.-Dallas a lead in the 61st minute off a double-assist from Omar Jaroun and Danny Meyer, giving the Comets a 1-0 lead. UMHB was not able to respond, giving the Comets the 1-0 win and advancing them in the tournament.

Nate Fagnant led the Cru with three shots while Colby Case, Case Carnes, John Williams and McKenna Cook all added one. UTD outshot the Cru 20-7 in the match. Goalkeeper Blake Landerplayed all 90 minutes for the Cru, recording three saves including one on a UTD penalty kick.

Carnes led the Cru with five goals on the season while Cook, Ben Hammonds and Julio Mar each added four. John Williams led the Cru with four assists while Fagnant took a team-high 37 shots. UMHB ends the season at 8-7-3 and graduates eight seniors from the 2014 roster. The Cru made it to the semifinal match of the ASC tournament before narrowly missing a postseason bid last year.