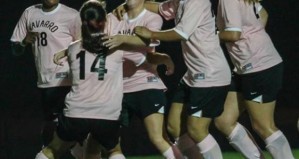 BREVARD COUNTY, FL – Sophomore Trudi Carter notched her 29th and 30th goals of the season to propel Navarro College to a 2-0 victory over Otero Junior College on Wednesday and into Friday’s semifinals of the NJCAA 2014 Women’s Division I Soccer National Championship.

Navarro’s opponent is to be determined.

“We could have put it away early but their goalkeeper came up with some great saves the first five minutes of the match,” said Navarro assistant coach Aric Bonner. “They made us grind through it. It’s a victory. It’s on to the semifinals. We’ll keep working. One game at a time.”

The victory was Navarro’s 10th straight following a midseason slump where it lost three straight.

“They re-committed themselves, re-focused themselves to getting to the final,” Bonner said. “Some players stepped up and as a group they just made the decision that they were going to work harder in practice to get back to where they thought they belonged which was to this stage. And so far they’re doing what they need to do. We’re performing actually better than we were last year. We’re not taking anything for granted but they’re moving in the right direction.”

Otero head coach Jamie Hutchison said his message to his team would be “if they play like they did today with lots of heart, we can never ask for any more. I think there were a couple of mistakes but those are always going to happen. We should be proud of our efforts. It’s a good thing to be here. We have to learn from this experience and do everything we can to come back stronger next year.”

Navarro threatened early, forcing sophomore goalkeeper Marisa Brown to make a point-blank save and then a diving save in the third minute. Two minutes later Carter easily beat Brown for a 1-0 lead.

As the half progressed Otero adjusted its defense and slowed the Navarro offensive attack while managing several chances that Navarro turned away.

In the 56th minute Brown was issued a red card for a handball outside the box on a breakaway where she was the last defender. She was ejected and replaced and Otero played one short on the field. Carter put the game away 19 minutes later for a 2-0 lead and the victory.