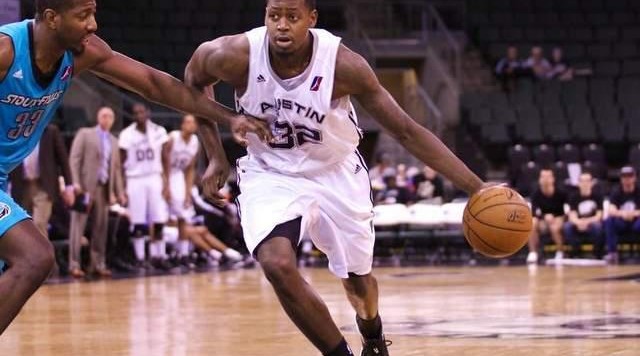 CEDAR PARK – The Austin Spurs pushed past the Texas Legends 112-106 at the SWBC Court at Cedar Park Center Tuesday afternoon, extending their winning streak to five.

Texas came out strong, going on a 9-2 run to start the game.  Austin Spurs guard Bryce Cotton put a halt to the run with a jumper during the ninth minute, followed by a three-pointer from forward Jarell Eddie. The teams exchanged baskets throughout the quarter.  Despite a half court bucket at the buzzer from Texas forward Ricky Ledo, the Austin Spurs led 36-34 at the end of the first.

Second quarter action saw an early 4-point play by Jarell Eddie that gave the Austin Spurs a spark. Forward Damien James added six points to keep Texas close.  After multiple ties, including 40-40 at an Austin timeout at 7:56, frustration grew as Texas received three technical fouls in a one-minute span, forcing forward Ivan Johnson to be ejected.  A made basket and foul shot from Austin Spurs guard Orlando Johnson sent Austin into halftime with a 65-54 advantage.

Texas chipped away at Austin’s lead, tying the game at 83 with 1:21 left in the third quarter. Cotton drained a three-pointer with 36 seconds left to put Austin back on top.  Austin Spurs forward Erik Murphy sunk two free throws near the end of the third, extending the Austin Spurs lead to 89-85 heading into the fourth.

Both teams got off to a slow start in the fourth quarter, with Texas scoring at the nine-minute mark.  A Texas three-pointer at 8:17 tied the game at 91-91, leading to numerous ties and lead changes throughout the period.  An eight-point contribution from Green in the final minutes, including 4-4 from the free throw line, helped Austin maintain a lead they would not give up.