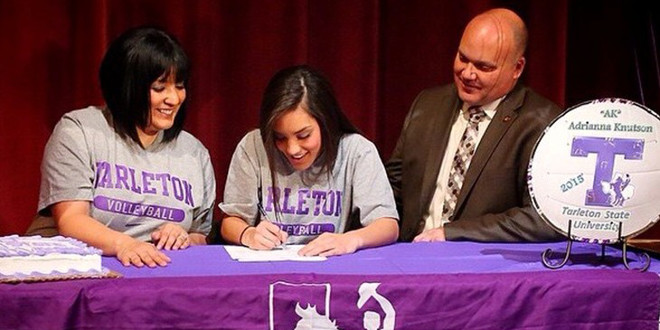 “I’m really excited to announce the signing of Adrianna Knutson,” said head coach Mary Schindler. “I think she can come in and help right away. She’s very quick and is very efficient in service receive. We think she’ll fit in as a great teammate and represent Tarleton State very well on and off the court.”

Knutson comes to Tarleton State after a stellar four-year playing career at Reagan High School where she was a four-year captain.

Her accolades starting pouring in as a freshman in 2011-12 when she was named the team MVP and captain before leading her team to a district championship as a sophomore.

As a junior, she was named the Time Warner Cable Channel High School Volleyball MVP, Defensive MVP, first-team all-district and academic all-district en route to leading the Rattlers to their second consecutive district championship and a regional semifinal appearance.

She capped off her Reagan career last month by leading her team to a third straight district championship – the first in Reagan’s first year as a 6A school. Knutson was named to the Lone Star Volleyball All-Texas team, a two-time player of the week and was a San Antonio Express Player to Watch as a senior. She was named the ‘Best Volleyball Player of AAU’ for her club team, Alamo Volleyball Club.

Knutson is the first member of the Tarleton 2015 recruiting class.

Tarleton State is coming off a 24-8 season in which the TexAnns earned their first-ever Lone Star Conference Tournament championship and advanced to their first NCAA regional tournament. The TexAnns ended the season receiving votes in the AVCA national polls for the first time in school history.