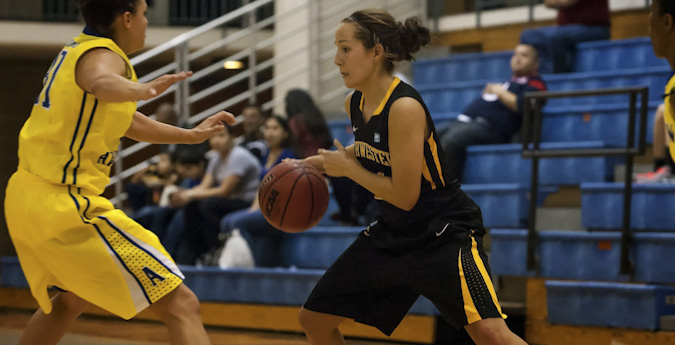 MEMPHIS, Tenn. – It was a game of runs as the Southwestern Pirates were edged out at the end of the game after posting two big rallies, falling 70-60 to 23rd-ranked Rhodes on Thursday in Memphis, Tenn.

Rhodes used a 12-2 run to start the game to jump out to an early lead. ­­Southwestern’s defense picked up, slowing the Lynx and got within three, 29-26 with two minutes remaining in the half.  Cullen Severson gave the Pirates the lead from the free throw line with one minute to play, 32-30, but Rhodes had the answer with a pair of free throws to tie the game 32-32 heading into halftime.

Audrey Garcia had a strong first half for the Pirates with nine points on 3 of 3 from three point range and Jordan Owens led with 11 points.

After five lead changes and one tie in the first five minutes, Rhodes took control of the game and led by nine, 50-41, with a 12-0 run in the next five minutes. Southwestern was held to two points in seven minutes before SU kicked it back in gear to pull within four, 52-48, with 7:44 remaining. The Pirate run continued as SU regained the lead 53-52 on Annie Bourne‘s layup with 6 minutes to play.

Rhodes’ leading scorer, Symone Daniels who posted 22 points in the win, took over the game to put the Lynx back on top that lasted until the final buzzer sounded.

Garcia led the Pirates with 23 points on 7-9 shooting from the field, 6-7 from three point range and 3-3 from the free throw line. Owens closed with 11 points and Madison Eschle kicked in 10.

Southwestern falls to 2-8 on the year and break for the holidays. They return to action on December 30th to take on Concordia University at 5:30 pm in Austin.