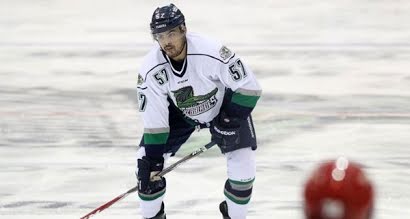 CEDAR PARK – The Texas Stars signed defenseman Matt Mangene to a Professional Tryout Agreement on Saturday.  Mangene will join the team on their current road trip in Toronto.

Mangene (man-JEEN), 25, began this season with the Florida Everblades of the ECHL, appearing in 22 games and registering 17 points (four goals, 13 assists).  The Manorville, N.Y. native brings 102 games of AHL experience with him between the Adirondack Phantoms and Bridgeport Sound Tigers from 2011-2014.

The 5-foot-11, 190-pound defenseman is a product of the University of Maine, where he tallied 55 points (20 goals, 35 assists) over a three-year stint prior to beginning his pro career.

Texas continues their road trip this Saturday when they visit the Toronto Marlies at 2 p.m. CST.

The Texas Stars entered the 2014-15 season as the AHL’s defending Calder Cup Champions.  Single-game tickets and season ticket packages for the 2014-15 campaign are on sale now.  For more information, call (512) GO-STARS (467-8277) or visit TexasStarsHockey.com.