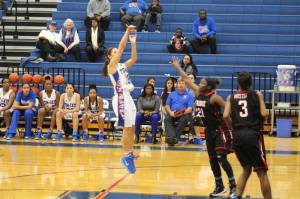 TEMPLE – In spite of a solid performance from Isabella Rodriguez with 11 points, Temple fell to Manor 47-45 on Tuesday night. Manor locked in the win in the fourth quarter by connecting on 6 of 8 free throws in the final 3 minutes of play.

Temple started out strong in third with a 3-pointer giving the Tem-Cats the lead at 29-26. However, the two teams battled evenly until Cienna Womack drained a 3-pointer herself with 36 seconds remaining to give Temple a 36-33 lead heading into the fourth.

Tia Thomas converted a 3-point play early in the fourth and gave the Tem-Cats a 3 point lead at 40-37 with 5:51 remaining.

However, sparked by a 3-pointer from Geneva Monroe and the solid free throw shooting; Manor regained a lead of 46-41 with 2:16 remaining.

Rodriguez brought Temple within 46-45 with 27 seconds remaining  but the Tem-cats could not capitalize on their opportunities late in the game.

With four points, Rodriguez saw her best shooting game in the first period.

Temple returns to 17-5A action on Friday on the road at Pflugerville Connally.

Despite Aleja Hill putting seven points on the board, Temple lost to Manor 36-22. Manor grabbed the lead against the Temple JV on a two-pointer from #24 in the second period and held on.

Despite a strong finish, with seven points in the final quarter, Temple failed to secure the win. Racking up 24 fouls in total, Temple played a physical game.

Hill connected with the net the most during the second period, earning four points for Temple.

Temple finished the game with 43 rebounds (25 offensive/18 defensive) and 13 steals.

Dejah Blackwell scored eight points to lead Temple to a 29-27 victory over Manor on Tuesday. Temple  clinched their lead in the fourth quarter on a free throw from Alexicia Medlock.

Temple trailed early, 14-4 by the half, only to come back strong in the final two quarters. On the strength of a 13-3 run, Temple notched 15 points in the final quarter.

Blackwell did not let up on the net for Tem-Cats, scoring six of her points in the final period.