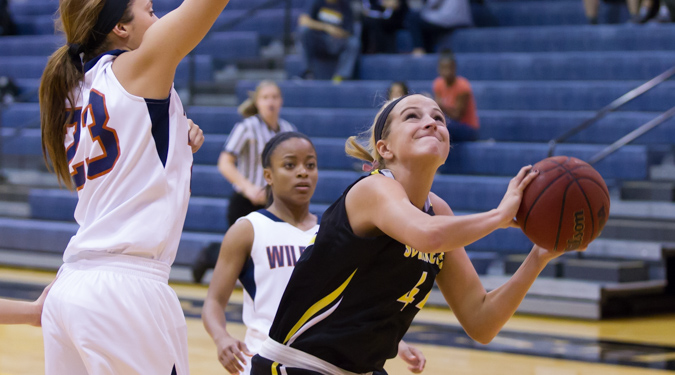 IRVING – In a barn-burner in Irving Friday night, Southwestern’s potent offense was held to just 60 points as UD defeated SU 63-60.

A tough first half saw five lead changes in the first six and a half minutes before Southwestern posted a seven point lead and held on to lead by two at halftime, 29-27.

The game remained tight throughout the remaining ten minutes and with three minutes to play Valerie Logan hit a three to tie the game 53-53. The lead pinballed back and forth and was tied 57-57 with 1:22 on the clock.

Marleyna Bustamante drained a pair of free throws with a minute to play to give Dallas a two point lead, 59-57 and Southwestern wasn’t able to hit the equalizer on the next possession. SU was forced to foul, but UD took care of business from the free throw line to close the game and hand the Pirates the loss.

Southwestern out-rebounded the Crusaders 46-32, but were forced into 21 turnovers while only forcing 13. The Pirates also got just eight points from the charity stripe in ten attempts while Dallas posted 17 points from the free throw line.

Jordan Owens led the Pirates with 18 points and 11 rebounds while Olivia Podaras had a strong game off the bench with 11 points and six rebounds in 22 minutes. Annie Bourne posted 13 boards and moves within 57 rebounds of tying the SCAC all-time career rebounding record. Valerie Logan had three assists tonight to move her into 10th in the SCAC in career assists.

Dallas was led by Michelle DeCoud who posted a game high 19 points and Bustamante added in 18.

Southwestern, now 6-11 on the year and 4-2 in the SCAC, falls into a three-way tie for second place with Dallas and Schreiner following the loss. They remain on the road to face Austin College on Saturday afternoon for a 4 p.m. tipoff.