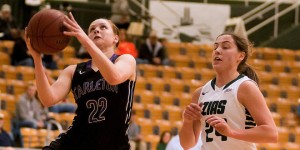 PORTALES, NM – It only took Bailey Wipff one half to set a new career-high in scoring, but it took the sophomore and the rest of the TexAnns a solid 40-minute effort to earn their 10th win of the season with a 71-56 rout of Eastern New Mexico Saturday.

Eastern New Mexico came out of the gate firing as the Zias built a quick 9-5 lead over the first 2:51, but Wipff got the TexAnns going with a baseline jumper on the ensuing Tarleton possession to kick start a 17-4 run over the next six minutes.

Wipff accounted for seven of the 17 points, including the first two and the final three on a triple with 10:57 to go in the opening half to put the TexAnns up 22-13.

After Eastern New Mexico stopped the bleeding with a 3-ball of its own, Wipff answered right back with a trey of her own to start another TexAnn run. The Wipff triple at 10:03 started an 11-2 surge that extended the lead to a half-high 16 points with 7:06 left to play.

The Zias put up a fight, however, to cut the Tarleton lead to 12 with three minutes left in the half, but an Ikpeaku Iwobi layup with 1:27 left on the clock would end up being the final points scored in the opening half as the TexAnns carried a 37-23 lead into halftime. Wipff set a new career high after just the first half with 15 points on 6-6 shooting from the floor and 3-3 shooting from downtown.

Out of the break, Iwobi converted an and-one to extend the Tarleton lead to 17 just 1:06 into the fresh half before the Zias struck for a 10-3 run of their own to pull the game back to 10 at the 15:49 mark. The TexAnns would bounce right back to extend it back to a 15-point game before the Zias’ next run.

With Tarleton leading 57-43, Eastern New Mexico ralled with seven unanswered points to pull within seven at 4:57 before Raven McGrath stepped into a triple, forced a steal on the defensive end and knocked down a pair of free throws to push the Tarleton lead back to 12 with 4:21 to go.

The Zias clawed back within eight, but Wipff stepped up for the TexAnns once again with her fifth 3-ball of the afternoon to start a game-clinching 9-2 run over the rest of the game to deliver Tarleton its 10th win of the season.

The sophomore from Lubbock led all scorers with a career-high 21 points on 8-9 shooting from the floor, including 5-6 from beyond the arc. She also added one rebound, one block and one steal on the afternoon.

McGrath scored 14 while Kathy Thomas and Iwobi each poured in 12 points to round out the double-figure scoring efforts for the TexAnns. Meagan O’Dell (2), Travanti Downes (2), Breanna Fuller (2) andKarli Moore (2) rounded out the TexAnn scoring.

Iwobi led all players with 13 rebounds to record her eighth career double-double and the fourth in the last five games.

The TexAnns will return home Wednesday night for a one-game break from Lone Star Conference action when they host McMurry at 5:30 p.m. in Wisdom Gym.