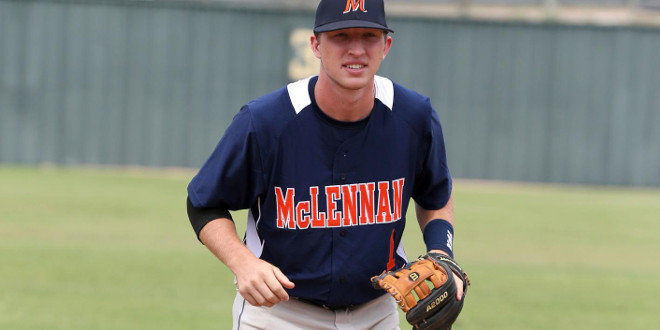 McLennan began the scoring with two runs in the bottom of the first. Will Fox was hit by the pitch, Tucker Johnson singled and Dimas Ojeda walked to load the bases. James Rudkin followed with a single to score Fox and Johnson.

Wharton tied the game with two runs in the top of the second. Jacob Barfield drew a walk and advanced to second on a wild pitch. Dallas Stefano followed with a single. Ricky Gonzales was safe at first on an error, bringing Barfield in to score. Anthony Reed followed with a fielder’s choice, scoring Stefano.

The Highlanders took the lead with three runs in the second. Jon Tauzin and Fox both walked. Johnson singled to score Tauzin. Ojeda followed with a double, scoring Fox and Johnson.

The Pioneers final run came in the top of the fifth on a solo home run by Anthony Reed.

McLennan added two runs in the fifth. Sydney Daley singled, stole second, advanced to third on a fly out by Tauzin and scored on a triple by Braxton Hollenshead. Hollenshead then scored on a passed ball.

The Highlanders added four runs in the seventh. Tauzin singled and Fox drew a walk. Both runners scored on a double by Johnson. Ojeda then singled to score Johnson. Ojeda advanced around to third on a single by Rudkin and a ground out by Brady Sullivan, then scored on a passed ball.

McLennan rounded out the scoring with one run in the eighth as Tauzin doubled and scored on a single by Stacy Heinatz.

“Today was what you call a Chamber of Commerce type of day,” coach Mitch Thompson said. “Just a flat out beautiful day for some college baseball.”

“I’m very excited about the way we played today and really liked our approach at the plate,” Thompson said. “You have to be excited any day you walk 10 times and have 15 hits, including seven for extra bases.”

“We played a lot of guys today with some seeing their first action of the year. Tauzin had a great first game, going 3-4 with two doubles, scoring three runs and throwing out Wharton’s only attempted steal of the day. Fox and Johnson really set the table for us today. Between the two of the, they were on base nine out of their 12 plate appearances. Ojeda and Rudkin took full  advantage. Ojeda drove in three runs on two doubles and a single. Rudkin had two hits and drove in two runs.”

“Defensively we were solid, only committing one error. We threw seven different pitchers  in an effort to keep guys fresh. Anytime you can do that and only give up six hits and three runs, you have to be happy with that performance.”

“We are looking forward to this weekend’s games in Midland, a challenging three-game series on the road against the team that knocked us out of the regional tournament last year. They will be a quality opponent. I can’t wait to get there to compete, because win or lose, we will learn a lot about ourselves.”

The Highlanders travel to Midland for a three-game series this weekend beginning Friday at 5 p.m.