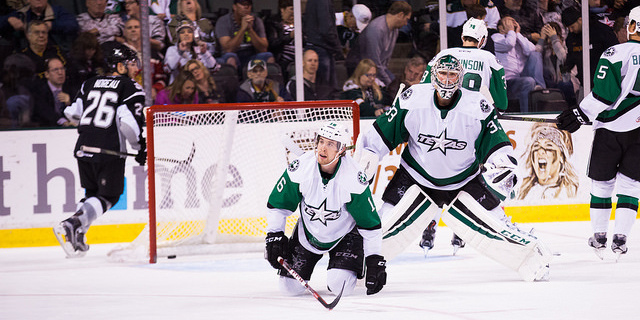 CEDAR PARK, Texas — Curtis McKenzie’s shorthanded goal forced overtime, but Dennis Everberg was the hero with the game-winner to lift the San Antonio Rampage to a 6-5 win over the Texas Stars on Wednesday night in front of 4,461 in attendance at Cedar Park Center.

With the overtime loss, Texas will be the road team in their opening round, best-of-five series against the San Diego Gulls to begin the Calder Cup Playoffs. Game 1 is Thursday, April 21, at 7:30 p.m. CST and Game 2 is Saturday, April 23, at 7 p.m. CST. Both games will be played at Cedar Park Center before the series shifts to San Diego, Calif.

Everberg’s game-winner came on a slap shot from the top of the slot with 54 seconds left in the extra frame. McKenzie’s shorthanded goal beat Reto Berra from the right circle with five minutes remaining in regulation. The goal was his second of the game and team-leading 24th of the season.

All game long things swung back and forth between the two in-state rivals. The Rampage (33-24-8-0) jumped out to a 2-0 lead in the game’s first eight minutes off deflection goals by Reid Petryk and Garry Nunn. Cory Kane put Texas on the board with five minutes to play in the first with his fifth of the season. Derek Hulak knotted the score at 2-2 entering the break when he snapped a clean wrist shot past Berra from the slot just over a minute later.

Greg Rallo gave Texas their only lead of the game at 8:59 of period two with a power play blast from the left circle for his 21st of the season and his 12th on the man-advantage. However, 14 seconds after Texas took a 3-2 lead, Mikko Rantanen tied the game on his 24th of the season and his 17th point against the Stars in nine meetings this year. Brandon Gormley gave San Antonio a 4-3 lead midway through the frame, but the two teams traded quick goals again minutes later.

McKenzie stuffed a centering pass from Travis Morin in the net at 16:34, but 14 seconds later, Taylor Beck’s breakaway goal off a stretch pass through center ice made it a 5-4 Rampage lead after two, and set up the late dramatics to finish the game.

Maxime Lagace suffered the loss for the Stars going 24 of 30 in net. Berra earned his fifth win in the last six games for San Antonio with 32 saves.

Texas finished 1-for-2 on the power play. San Antonio went 0-for-4.

The Texas Stars are the primary development affiliate of the NHL’s Dallas Stars and currently in their seventh season at Cedar Park Center. Full season, 24-game and 12-game ticket packages for the 2016-17 campaign are on sale now.  For more information, call (512) GO-STARS (467-8277) or visit TexasStars.com.