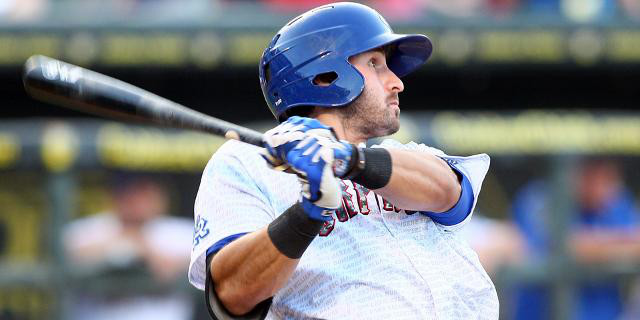 MEMPHIS, Tennessee – A third inning two-run home run off the bat of DH Joey Gallo and a late insurance homer from 2B Drew Robinson in the sixth propelled the Round Rock Express to a 3-0 win over the Memphis Redbirds Saturday night at AutoZone Park.

Express LHP Michael Roth (2-0, 0.87) picked up the win in his first-ever start for Round Rock (9-6). The lefty dazzled in 5.1 innings of work, surrendering just five hits and one walk while recording five strikeouts. The Redbirds (7-8) only managed to push two runners into scoring position against the starter, with neither advancing past second base.

Following the path that Roth blazed on the mound, the E-Train bullpen combined for 3.2 innings of nearly flawless baseball to preserve the team’s first shutout victory of the 2016 season. RHP Francisco Mendoza made his return from the disabled list and hurled 2.2 innings in which he allowed just one base hit – a single to RF Nick Martini – while striking out two.

RHP Carlos Fisher took over the ninth, retiring SS Greg Garcia before a fielding error by Robinson allowed LF Anthony Garcia to reach safely. A stolen base and two-out single off the bat of DH Carlos Peguero moved Garcia to third and threatened to derail the shutout bid, but Fisher recovered to retire Martini on a groundout after just one pitch.

The Express started the scoring in the third inning as SS Jurickson Profar slapped a leadoff single into center field. With one down, Gallo stepped to the plate and launched the first pitch he saw deep into right field, past Martini and over the wall into AutoZone Park’s picnic area. Gallo’s fifth homer of the season scored Profar and gave the E-Train an early 2-0 lead on the road.

Robinson added to Round Rock’s lead in the sixth inning with a solo shot that carried deep into the seats in right field. The infielder’s first Triple-A homer since August 29, 2014 gave the Express a 3-0 lead that proved to be too much for the Redbirds to overcome.

The two Southern Division foes will face off again tomorrow at 2:05 p.m. from AutoZone Park in the southwestern corner of Tennessee. RHP Nick Tepesch (1-0, 1.80) will take the bump for Round Rock opposite Memphis RHP J.C. Sulbaran (2-0, 2.30).

Single game tickets are available along with season ticket packages and group discounts. For more information on the Express, visit www.RoundRockExpress.com or call (512) 255-2255. Keep up with the Express on Facebook, Instagram, Snapchat and Twitter!