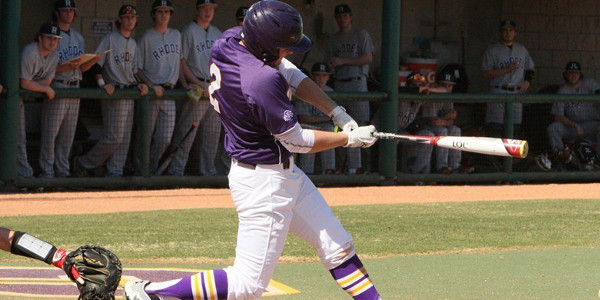 MARSHALL, Texas – The University of Mary Hardin-Baylor baseball team could not come up with enough offense in either contest as the Cru dropped both ends of a doubleheader to East Texas Baptist Saturday in Marshall. UMHB lost game one 6-3 and fell 15-9 in game two. The Cru is now 11-24 overall and 6-15 in American Southwest Conference play on the season. ETBU improves to 25-11 overall and 16-5 in ASC play on the year with the two victories.

UMHB jumped on top early in the second game but could not hold on against a barrage of Tiger home runs in a 15-9 loss. Dakota Parsons and Max Conway singled home runs in the top of the first inning and Seth Martin added an RBI single in the top of the second to make it 3-0 Cru. Conway doubled home a run and Riley Davis scored on a wild pitch in the third to make it 5-0 and a Chase Burrow RBI groundout and RBI single from Davis took it to 7-0 in the top of the fourth. But things went awry for the Cru in the bottom of that frame. Zach Compton and Connor Combs each blasted two-run homers for ETBU and Tyler Bates added a grand slam to give the Tigers an 8-7 lead. ETBU hit back-to-back solo home runs leading off the bottom of the sixth and then added another run to take the lead to 11-7. Scott Stephens had a sacrifice fly and Will Stafford added an RBI single in the top of the seventh to make it 11-9, but ETBU answered with another two-run homer and an RBI single in the bottom of the inning. The Tigers scored one more in the eighth for a 15-9 lead and the Cru left a pair of runners on base in the top of the ninth to end any comeback bid. Mikey Bielamowicz took the loss for UMHB to fall to 0-2 on the year. Parsons, Davis and Conway had three hits apiece for the Cru in the loss. Bryce Winter had four hits and a pair of home runs to lead ETBU, who hit six homers as a team. Logan Sprinkle earned the win to go to 2-0 on the year and Jimmy Russo picked up his seventh save of the season.

UMHB gave up six consecutive runs and saw a late rally fall short in a 6-3 loss in game one. The Cru grabbed a 1-0 lead on Burrow’s RBI single in the top of the first. ETBU scored two in the bottom of the first, one in the second and three more in the fourth to take a 6-1 lead. Stephens ripped his team-leading fourth homer of the season over the left-centerfield wall in the top of the seventh and Martin scored on a Tiger error to cut the lead to 6-3, but UMHB would not get any closer. Martin had three of the Cru’s seven hits in the game and Connor Heussner took the loss to fall to 2-5 on the season. Ashley Dukes earned the win for ETBU to move to 3-1 and Russo notched his sixth save of the season for the Tigers. No ETBU player had more than one hit in the contest.

The Cru will now return home to close out the regular season with four home games next week. UMHB will host U.T.-Dallas for a non-conference game at 7:00 PM on Tuesday. The Cru will then welcome Concordia Texas to Red Murff Field for a crucial ASC series on Friday and Saturday.